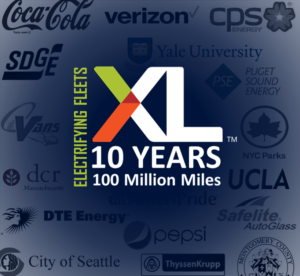 XL customers have driven 100 million miles using the company’s hybrid and plug-in hybrid electric drive systems, according to the company, which is also celebrating its 10th anniversary this year.

Since 2009, XL has electrified the fleets of some of the largest and most recognized companies, municipalities and organizations in North America. One of XL’s first customers, Coca-Cola, has deployed nearly 300 hybrid-electric GMC Chevrolet Express vans since 2012.

XL recently examined the data from the first 10 Coca-Cola vehicles deployed between 2012 and 2013.  The vehicles are still on the road today and have driven an average of 150,000 miles each — one van has more than 215,000 miles — with an average fuel-economy improvement of 20.2% over their lifetime.

In the News: Automotive Fleet