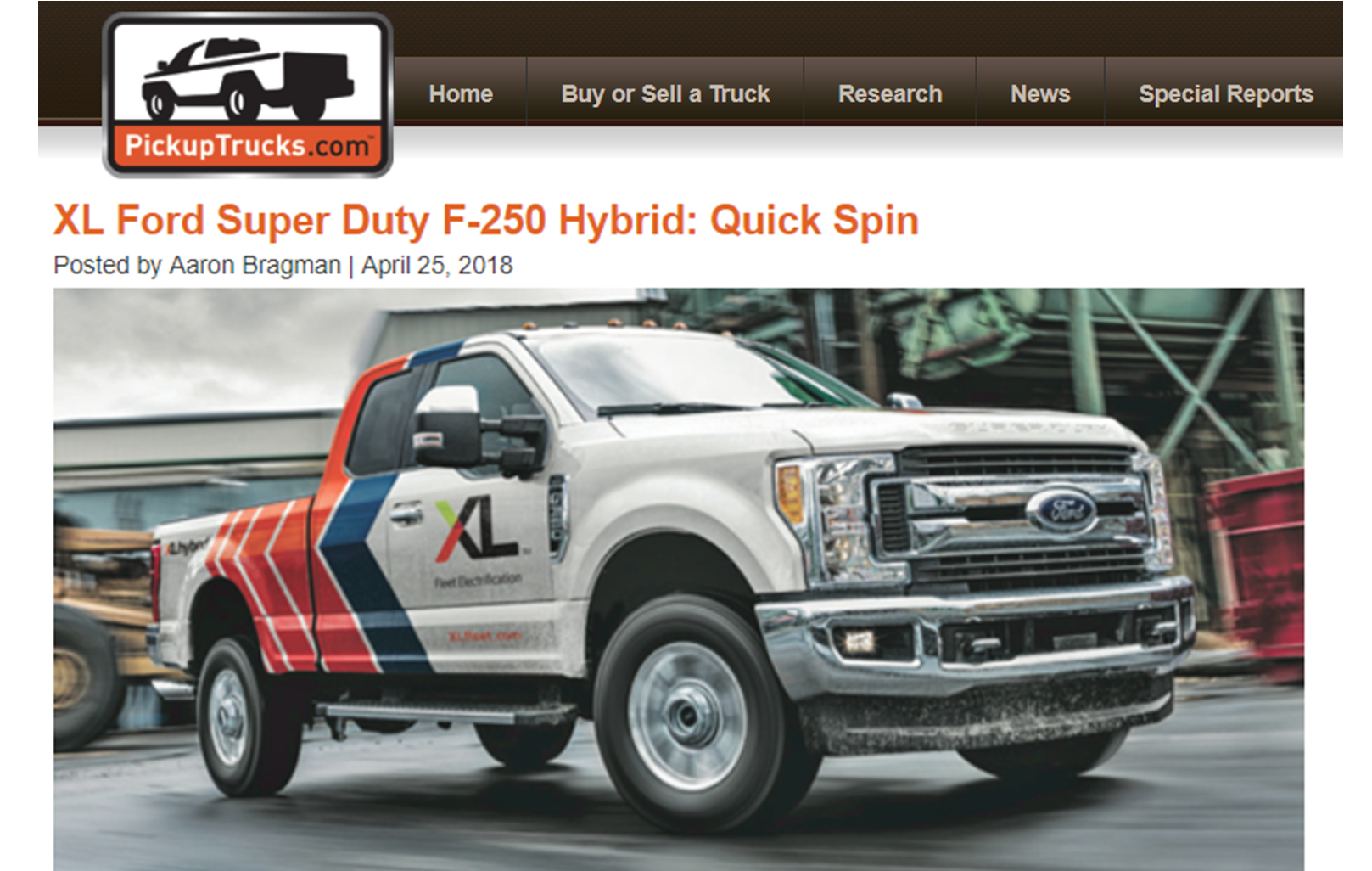 By now, everyone’s heard that Ford intends to launch a new F-150 hybrid in 2020. We don’t have many details on that truck yet, but did you know that you can buy a hybrid F-Series right now? The truck is not totally built by Ford per se; instead, it’s modified by a Ford-certified company called XL then sold through XL or a Ford Commercial Vehicles dealer.

XL makes two models: the F-250 Super Duty Hybrid you see here and an F-150 Plug-in Hybrid that we’ve yet to drive. However, we recently were able to get some seat time overnight in the electrified Super Duty, putting significant miles on it to see if XL’s hybrid system is worth the expense.

The F-250 Hybrid starts out as an ordinary gas-powered Ford F-250 — powered by Ford’s venerable 6.2-liter “Boss” V-8 making 385 horsepower and 430 pounds-feet of torque. It’s mated to a six-speed automatic transmission and can be had in two-wheel-drive or 4×4 configuration. In fact, the F-250 powertrain is completely untouched by the XL hybrid system. It doesn’t interfere with the engine operation; it doesn’t ever operate in all-electric mode; it doesn’t even really talk much to the truck. What it does do is listen.

In the News: PickupTrucks.com 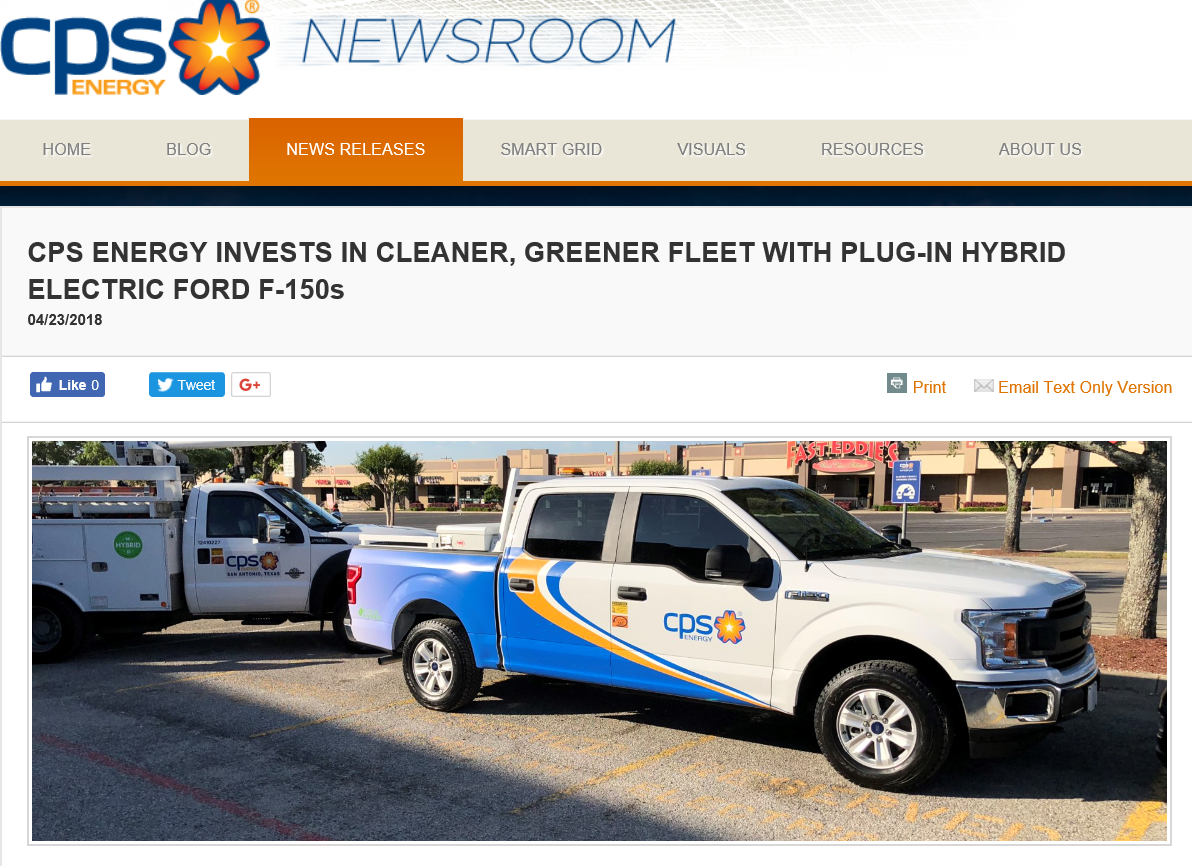 Driven by its commitment to the community and the environment, today CPS Energy announced the purchase of 34 XLP Plug-In Hybrid Electric Ford F-150 pickup trucks – the largest purchase of Plug-In F-150s of any utility or private company to date and the 1st in Texas to use the vehicles.

The new vehicles will replace the less efficient fleet of vehicles.  The new trucks deliver significant fuel economy equivalency gains – offering more than 50% better fuel economy and a comparable reduction in emissions over similar standard vehicles — based on manufacturer’s figures that take into consideration long commutes.

“Through our latest hybrid-electric vehicle investments, we will leverage new technology that has been economically designed to help protect our environment,” said Paula Gold-Williams, CPS Energy’s President & CEO. “These cars are great enhancements to our fleet of vehicles, which are used to serve our customers, day-in and day-out.” 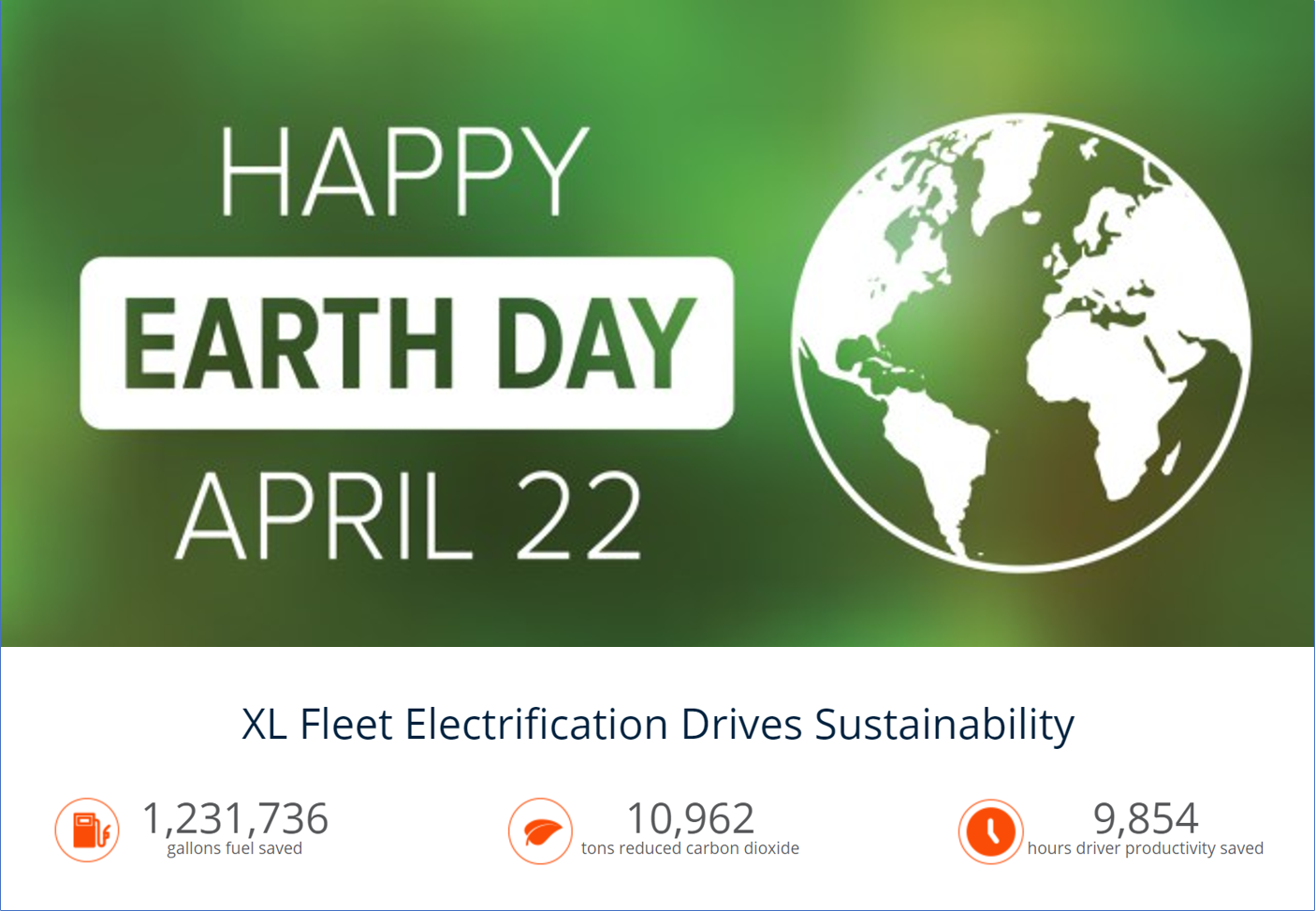 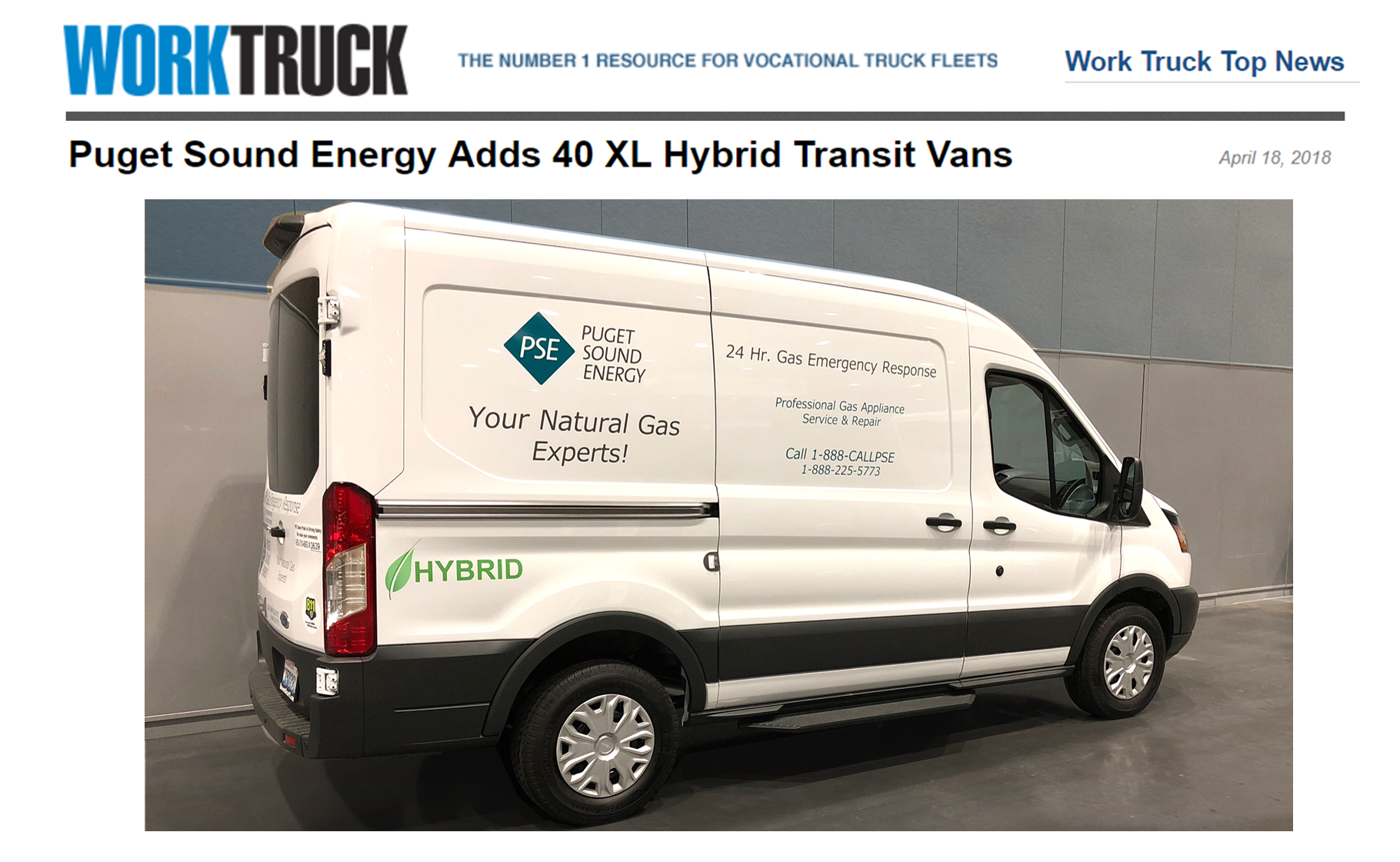 PSE selected XL’s fleet electrification technology for its 40 Ford Transit utility vans, an upgrade that is expected to reduce each van’s carbon footprint by up to 20% and increase fuel economy by as much as 25%.  The utility worked with XL to upfit each van with an electric motor and advanced lithium-ion battery pack, as well as the XL Link connected vehicle system.

“We know our customers value the environment, so we were excited for the opportunity to reduce our carbon footprint through our fleet vehicles,” said Wayne Gould, director of corporate shared services at Puget Sound Energy. “This is another step for PSE to invest in the development of cleaner alternatives and technologies.”

In the News: Work Truck

While a broad range of incentive options have been rolled out over the years, the specific type that is proving to be very versatile and effective, especially among fleets, is voucher programs.

Voucher programs, which have launched in certain cities and states over the past several years aimed at commercial fleets, essentially offer point-of-sale rebates on the purchase (or sometimes, the lease) of a range of eligible alternative technology vehicles. The fleet customer gets an immediate discount off the regular price of new vehicle technology, while the vehicle or technology provider (not the fleet) performs the back-end diligence to get reimbursed by the voucher program administrator.

In The News: Green Car Congress

Two of the most popular terms in urban planning today are smart cities and clean energy. These concepts naturally go hand-in-hand.

As cities get smarter, they use energy more efficiently and in a more controllable fashion, and they are better able to incorporate intermittent clean energy sources. Cities, and the power grids that support them, can use traditional power generation and stationary energy storage to support intermittent resources like wind and solar, but the lowest-cost solution for over a decade has been to control power loads with demand response. A large and emerging new power load is electrified vehicles, and they will play a critical role in the future of smart cities and clean energy.

To put things in perspective, the battery systems in the U.S. Toyota Prius fleet alone represent about 40 gigawatts of power. That’s about the same as the entire electric grid in New York state. While those vehicles don’t connect with the grid, there is a growing wave of plug-in vehicles with much larger batteries coming, and they will be a dominant and flexible force on the grid. If integrated properly, however, they can support the growth of smart cities and clean energy in profound ways.

In the News: Xconomy 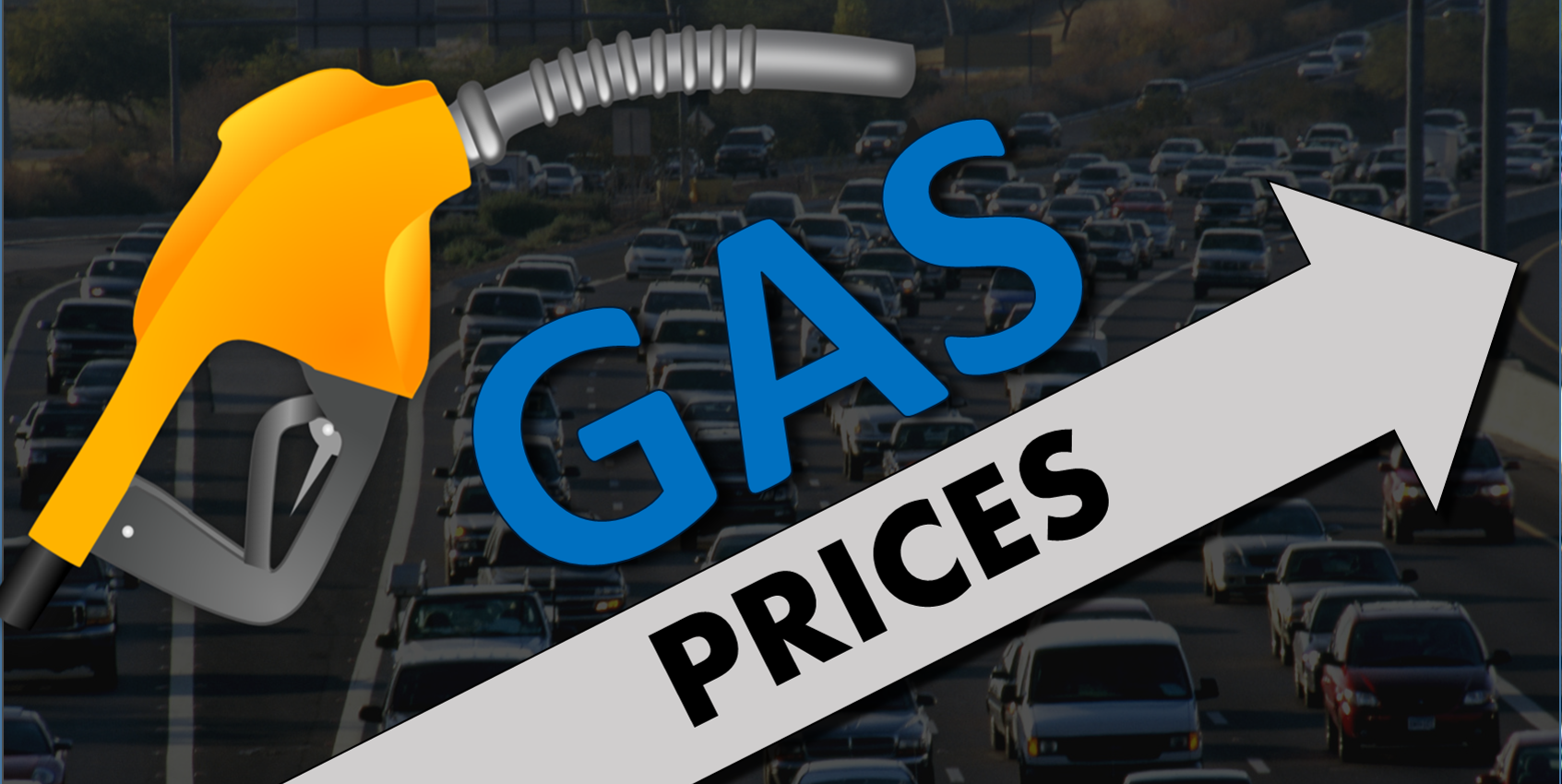 Spring is upon us, and with rising temperatures also come rising gas prices across the country. AAA is reporting that gas prices are expected to rise to their highest levels since 2015, beginning when the refineries change over supply from their winter to more expensive summer blends. AAA’s prediction is for gas prices to rise nationally to an average of $2.70 a gallon, with some states, such as California, seeing spikes as high as $4.00 a gallon. These examples reflect a price increase on average of about $0.40 a gallon higher than what was seen last spring. Just last week alone, gasoline prices rose an average of $.05 per gallon across the country* in what is likely to become a trend in the months ahead. After knowing all the facts, here are some suggestions, including some from AAA, to keep your fuel costs down and increase sustainability for your fleet.