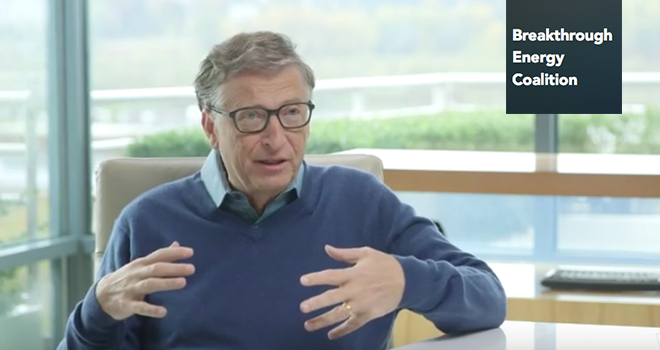 From your recent MIT Tech Review interview, it sounds like your Breakthrough Energy Coalition, which is rallying investors to fund more clean energy technologies to stop global warming, is progressing.

As lifelong entrepreneurs and founders of a scaling clean technology company, we find it inspiring that you are personalizing this effort to enable transformative energy solutions, and that you’ve set an ambitious goal to stop global warming at less than a 2 degrees Celsius rise. Let’s go for it!

To accelerate the Coalition’s mission, we respectfully offer two recommendations:

Novel technologies typically take 10 or more years to emerge from a lab, and another 10 or more years to scale in the marketplace. While we need to pursue these new technologies and try to accelerate their time to market, we don’t have time to wait. We need to achieve significant GHG reduction wins in the next 10 years – hence the goals recently set at the U.N. Climate Change Conference (COP21) – and those wins will most likely come from currently available technologies.

There are some big clean energy wins to learn from. For example, traditional investors didn’t pay attention to the U.S. wind market until it hit ~$1B per year in the early 2000’s. When those investors finally did get involved, the cost of capital dropped by ~50% and the industry grew more than 10X in five years, and since 2008 the U.S. has installed $100+ billion worth of wind power. Wind’s success also helped solar to scale too, since investors comfortable with wind power were able to transition more easily to solar and use financial instruments like PPAs to reduce capital costs and increase adoption rates.

Now clearly these successes in wind and solar deployment wouldn’t have happened if fundamental investments in novel technology weren’t made decades ago. However, it also took a lot of investment in companies innovating on existing technologies and different business models to get these two industries to $1+B markets so that traditional sources of funding would start to pay attention and get involved. Now we ask for the Coalition to follow the same model – investment in both new and existing technologies to create additional clean energy successes.

It’s extremely challenging to make breakthroughs in the lab. However, it’s easier to scale those breakthroughs when there is a successful path to follow.

To facilitate investment in new and existing technologies, we recommend the Coalition establish two separate investment processes. After all, identifying and funding early-stage technologies can be a very different process than backing existing technologies that are closer to scaling. Having been deeply involved in energy innovation for over 10 years, and seeing hundreds of university-based energy companies judged by industry experts, the team with the novel technology almost always gets more early stage attention even when the judges acknowledge that the team with a great innovation on an existing energy technology is lower risk and could have a bigger GHG reduction impact. This mindset leads to missed opportunities for big impacts.

In fact, historically most of the value created from a novel energy technology is captured by the investors, companies and entrepreneurs who deploy the technology at scale, not those who invented the technology. This creates a serious disconnect in funding. Why would investors take on the risk of long technology development timelines if they can get faster and larger returns by investing in late stage technologies and companies? Kudos to the Coalition for making a bold statement by investing early in novel technologies that likely need a long time to get to market.

However, history has shown there are really two “Valleys of Death” that a clean energy technology needs to cross. Getting a new technology to work in the lab and in the field is the first “valley”. The second valley is getting that solution to scale in a meaningful way (e.g. into a multi-billion dollar opportunity when the traditional investors really start to pay attention). This is where the Coalition can make a big difference. By allocating its funding to both new and existing energy technologies, the Coalition can help bridge both “valleys” and help more existing technologies break through. Also, by coordinating these two stages of investment, the Coalition can ensure that more of the value normally captured in the deployment of existing technologies also goes to the companies creating the novel technology. This should attract even more capital to earlier stage companies to accelerate innovation, and accomplish your goal of stopping global warming.

Tod Hynes and Clay Siegert are founders of commercial fleet electrification company, XL Hybrids, in Boston. Tod is co-founder of the MIT Clean Energy Prize and a Senior Lecturer at MIT where he teaches a graduate course called Energy Ventures. Clay has a master’s degree in engineering from MIT and originally got into energy startups in the late 90’s.